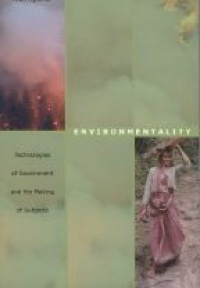 In this innovative political and historical study, Arun Agrawal illuminates changing environmental processes, institutions, and identities through an examination of forest protection by villagers in the northern Indian state of Kumaon. In the early 1920s, Kumaoni villagers set hundreds of fires protesting the colonial state's environmental regulations. By the 1990s, residents of Kumaon had begun to carefully conserve their forest land and resources. Agrawal analyzes and explains this striking transformation. In so doing, he demonstrates how scholarship on common property, political ecology, and feminist environmentalism can be combined--in an approach he calls "environmentality"--to better understand Kumaon's changes in environmental government. Such an understanding is relevant to other parts of the world, where local populations in more than fifty countries are engaged in similar efforts to protect environmental resources. Agrawal brings environment and development studies, new institutional economics, and Foucauldian theories of power and subjectivity to bear on his ethnographical and archival research. He visited nearly forty villages in Kumaon, where he examined local records, assessed the state of village forests, and interviewed hundreds of Kumaonis. He describes how, in response to the fierce protests against centralized rule, the colonial state decentralized its regulation of the forest. This decentralization changed relations between states and localities, between community decision-makers and common residents, and between individuals and the environment. In exploring these changes and their significance, Agrawal shows how awareness of environmental politics is enriched by attention to the connections between power, knowledge, institutions, and subjectivities.