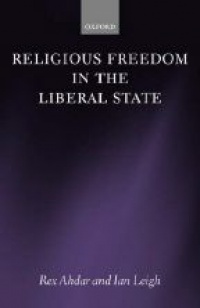 There is a growing recognition of the challenge that religions pose for pluralist, multicultural democracies. 'Fundamentalist' beliefs and practices test the limits of religious freedom, and seem to contradict the very basis on which liberal states protect religious liberty. Religions, moreover, are often associated with intolerance and persecution, yet insist upon religious liberty for themselves. This book inverts these stereotypes by presenting a sustained critique of how
religious liberty ought to be understood in liberal legal systems and develops an alternative, Christian response.

In Part One the prevailing liberal approach to religious freedom is compared with historic and contemporary understandings developed by Christian theorists, and an alternative principled basis for religious liberty, from a distinctively Christian position, is developed. Part Two analyses the variety of stances the liberal state may take towards organised religions, and explains the nature of the guarantees for religious freedom in domestic and international law. The difficult question of
precisely when and how far religious liberty should be limited is carefully analysed. Part Three deals with concrete contemporary controversies involving the recognition and protection of religious beliefs and conduct, looking at issues such as family and parenting, medical treatment, education, employment, religious group autonomy, and freedom of expression and protest.

Extensive reference is made throughout the analysis to UK law and the European Convention on Human Rights, also the laws of other jurisdictions such as the US, Canada, South Africa, Australia and New Zealand, making this a wide-ranging, timely, and thoughtful examination of a perplexing contemporary controversy.