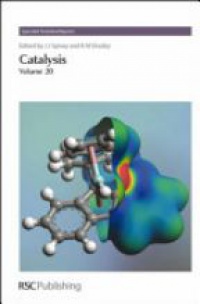 Přidat do wishlistu
Zpět Tisknout
Koupit
There is an increasing challenge for chemical industry and research institutions to find cost-efficient and environmentally sound methods of converting natural resources into fuels chemicals and energy. Catalysts are essential to these processes and the Catalysis Specialist Periodical Report series serves to highlight major developments in this area. This series provides systematic and detailed reviews of topics of interest to scientists and engineers in the catalysis field. The coverage includes all major areas of heterogeneous and homogeneous catalysis and also specific applications of catalysis such as NOx control kinetics and experimental techniques such as microcalorimetry. Each chapter is compiled by recognised experts within their specialist fields and provides a summary of the current literature. This series will be of interest to all those in academia and industry who need an up-to-date critical analysis and summary of catalysis research and applications. Catalysis will be of interest to anyone working in academia and industry that needs an up-to-date critical analysis and summary of catalysis research and applications.