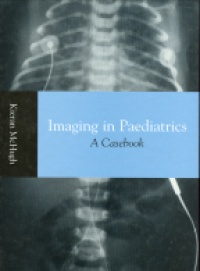 Imaging in Paediatrics A Casebook

This book has been written primarily for paediatricians in training prior to the MRCPaediatrics examination. It should also be found useful by medical students during their paediatrics rotation. Radiology trainees may benefit from reviewing the 100 sets of images and from the clinieal information contained within each case. The book may also enable paediatricians in general to 'freshen up' their radiologieal skills. The 100 images encompass the whole range of paediatrie radiology as it is currently practised with particular emphasis on plain radiology. Few cases of trauma to the paediatrie skeleton have been included as trauma plays a small role in medical paediatrie examinations. Uhrasound is of fundamental importance in the imaging of children but it is essen ti ally a dynamie process that does not lend itself to the blind interpretation of single image s and so not many ultrasound image s have been used in this book. The role and usefulness of uhrasound has been repeatedly stressed throughout the text, however. A question and answer format has been used as this is the best and quickest method of preparing for examinations in general. The book has been arbitrarily divided into five sections (neonatology, cardiovascular and respiratory, gastrointestinal and genitourinary, musculoskeletal, and neuroradiology). Candidates for a paediatrics examination should be familiar with the diverse nature of current imaging techniques as applied to children. A basie understanding of and approach to radio logical interpretation is included in the text and the layout of the book should allow readers to prac tise their technique. Some of the clinical and radiological information in the text is brief and simplified as detailed descriptions of the various topics covered is beyond the scope of the book. Readers are referred to the bibliography for more wide-ranging information. One or occasionally two references of relevant radiologic or paediatrie interest are also included at the end of each case. Although many illnesses, particularly in children, can be tragic, the anonymous interpretation of radiographs and other images can be stimulating and enjoyable. Go ahead-enjoy quizzing yourself and improving your knowledge of paediatric radiology. Good luck in the examination. Hopefully, this book will reduce your need of it!