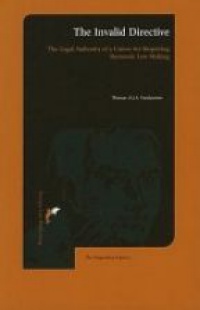 Přidat do wishlistu
Zpět Tisknout
Koupit
The invalidation of the directive triggers interesting legal questions, most notably on how that effects the status of national implementation legislation. Is national law invalid as a direct consequence of the invalidity of the underlying directive? If that would not be the case, why would private plaintiffs be able to directly challenge directives before the ECJ and why would they provoke preliminary references on their validity? What is the point of ‘Zuckerfabrik’ interim relief against directives? These and other questions have been identified in this study that explored the consequences of the invalidity of a directive in terms of its ‘legal authority’ (as opposed to its ‘political authority’). It thereby distinguishes between the ‘authority’ attributed to directives in European law and in Member State law. Is the ‘authority’ attributed to directives in European law such that the directive’s invalidation per se renders national law invalid? And if that would not be the case, can such invalidity follow from the ‘authority’ attributed to directives in national law itself?