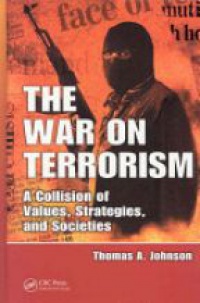 The War on Terrorism: A Collision of Values, Strategies, and Societies

Přidat do wishlistu
Zpět Tisknout
Koupit
In order to eradicate terrorism, our nation must go beyond merely shoring up military strength. It must also effectively confront the fundamentalist ideology that fuels and supports the terrorists. The War on Terrorism: A Collision of Values, Strategies, and Societies operates on the premise that the violent rejection of globalization at the root of terrorism must be addressed not solely by Western society and its armies, but also by those moderate and progressive Muslims and their religious leaders who are capable of rebutting the medieval underpinnings of the jihadist interpretation of Islam. By promoting an understanding of both terrorism and the terrorist, this volume examines the complexities inherent in creating a national security policy that successfully combats terrorist attacks. Emphasizing the underpinnings of terrorist ideology throughout the text, the book examines the tools used by terrorist groups, the infrastructure targets most vulnerable to attack, and our vulnerabilities to the five major categories of WMDs. It describes the roles and responsibilities of each of our nation’s 16 intelligence agencies, while also reviewing the role conflict between the National Security Council and the U.S. State Department. The final chapter summarizes the challenge of globalization and presents a future forecast of the trends in global terrorism. An understanding of the forces behind terrorism and its impacts are crucial to all nations and to the policy makers who design and construct counterterrorism programs. It is only through a multi-faceted approach that we can ever hope to make our country safe. This comprehensive volume provides those charged with protecting our homeland with the information necessary to understand terrorists and terrorism and to create effective, sensible national security policies.