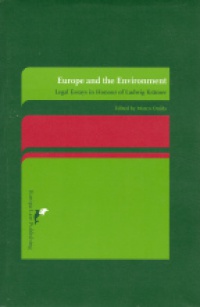 Europe and the Environment: Legal Essays in Honour of Ludwig Kramer

He successfully combined his profession as an official of the European Commission with intensive writing and teaching activities. Dr. Krämer is the author of some 20 books and handbooks and 140 articles on EC environmental law. He is an environmental law professor in Bremen and regularly teaches at several European and non-European universities. His academic skills are highly appreciated. In his teaching and speeches, he has inspired his audience and spurred many young people into working to protect the environment.

On the occasion of his retirement from the Commission, a group of colleagues and friends who have had the privilege of benefiting from Ludwig Krämer’s experience, learning and generosity, decided to honour him with a liber amicorum, which assembles legal essays on a number of EC environmental law subjects.