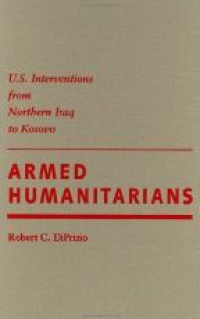 U. S. Interventions From Northern Iraq To Kosovo

Since the end of the Cold War, the US military has found itself embroiled in many "operations other than war". Most controversial of these have been humanitarian interventions, which often lacked a clear majority of either elite or public support. Although the immediate threat represented by the events of September 11, 2001, has coalesced public opinion behind the Bush administration's anti-terrorism campaign, it is likely that the debate over humanitarian interventions will again take centre stage in the coming years. In this book, political scientist Robert C. DiPrizio examines representative case studies from the recent past to offer insight into how a sitting president might (or should) respond to such future emergencies. DiPrizio examines the factors that lay behind US decisions to send troops into civil conflicts abroad, analysing both the decision-making process and the domestic and international constraints placed upon them. Focusing on the administrations of George H.W. Bush and Bill Clinton, he shows that the president remains the chief player in such decision making, and through six case studies - northern Iraq, Somalia, Rwanda, Haiti, Bosnia, and Kosovo - he looks in detail at both positive and negative intervention decisions. DiPrizio finds that in each of these cases, motivating factors included a different mix of "soft" security concerns (such as refugee flows, regional stability, alliance credibility, and interalliance tensions), true humanitarian concerns, and domestic politics. DiPrizio concludes with a discussion of the possible impact of America's ongoing anti-terrorism campaign on the current Bush administration's policy on humanitarian interventions.