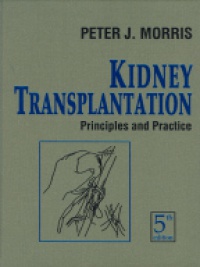 This book is a masterly review of the field of renal transplantation, edited by Sir Peter Morris, a universally esteemed pioneer who has devoted his life to the clinical and immunologic aspects of renal transplantation. The previous four editions, beginning in 1978, have chronicled the many changes and successes in this field. The fifth edition is much more expansive and, in essence, serves as a true encyclopedia of renal transplantation, the most extensive and thorough book on the subject yet published. Morris has not only selected international experts to write the 43 chapters, but has also given them direction as to how the chapters should be written. Full coverage of each area is provided, so that the chapters are not just descriptive but provide an immunologic, pathological, and physiological basis for the most current approaches to the transplant recipient. This, in turn, is blended with a futuristic portrayal of potential strategies to solve persistent problems in the field. Discussion of the future is an integral part of most chapters, but certain chapters are entirely devoted to exciting new approaches that will probably make renal transplantation even more successful and more accessible to all patients with end-stage renal disease.

The chapter on xenotransplantation is important because it underscores the increasing need for donor organs, given the increasing divergence between the supply of cadaveric donor organs and the number of patients on waiting lists. It also updates research and presents strategies to circumvent the immunologic barriers to xenotransplantation. The risks of interspecies transfer of infection are discussed, as are ethical, cultural, and religious issues that would emerge with the application of this therapy.

Another new chapter covers chronic renal-graft rejection, the most prevalent cause of graft failure during the first decade after transplantation. New concepts regarding the cause of chronic rejection are thoroughly examined, including immune and nonimmune factors, and particular attention is paid to the renal response to injury and fibrogenesis. In line with other chapters, this one also presents strategies for the prevention and treatment of chronic rejection that might be used in the future.

The Holy Grail of organ transplantation is immunologic tolerance, a state in which a well-functioning allograft can be maintained over the long term without the need for immunosuppressive medication. The approaches to achieving this goal could not have been better described and explored than in the chapter on tolerance. As is so aptly described, tolerance of the allograft needs to be reliably achieved in a way that ensures that most of the recipient's lymphocytes are able to perform their normal function of protecting the body from infection and cancer. The immunologic basis and mechanisms of tolerance are clearly presented, so that even though the reader may not have a background in immunology, the concepts are readily understood.

A notable technical achievement since the publication of the previous edition of this book has been the development of laparoscopic nephrectomy in living donors. This approach appears to be gaining widespread acceptance because its more limited incision, more rapid recovery, and decreased need for analgesic medications, as compared with the traditional approach, seem to have dramatically increased the availability of kidneys from living donors, particularly at a time when more patients than ever require transplantation. This new chapter provides a thorough description of this procedure with well-drawn sketches to demonstrate the steps involved. The complications and results of the procedure, including renal function after transplantation, are well described and compared with those of the standard open nephrectomy used in donors.

In the preface, Morris comments that the advances in renal transplantation have been considerably greater than he would have expected in the six years since the fourth edition. This could not be more true than in the emergence of new immunosuppressive agents, which are in good part responsible for the almost continual yearly improvement in the outcomes of renal transplantation. Six chapters are devoted to a detailed explanation of the important topic of T-cell-selective immunosuppressive agents for kidney transplantation. Also coincident with improving kidney survival and function over the years has been the improved management of complications; there is no better discussion of this topic than in the chapters devoted to vascular, urologic, cardiovascular, infectious, hepatic, and neurologic complications, as well as cancers after transplantation.

In the first edition of his book, Morris remarked that 30,000 kidney transplantations had been performed throughout the world at that time. Approximately 500,000 renal transplantations have now been performed. This large number does not take into account the ever-increasing number of patients who are awaiting the benefits of this therapy and who are more likely than in previous years to realize their hopes of a new life as a result of the increasing use of kidneys from living donors, possibly xenotransplantation, and the potential achievement of immunologic tolerance in the future. In other words, kidney transplantation is an established and highly successful therapy, and because of its success, the long-term health of the recipient and optimal graft survival are now dependent not only on transplantation physicians at transplantation centers, but also on practitioners far from these centers. This fifth edition will serve as an important textbook for those specializing in kidney transplantation; it is the most reliable and all-inclusive single-reference book for physicians outside transplantation centers, who are now encountering increasing numbers of kidney-transplant recipients. In short, this book is a must for every hospital library.