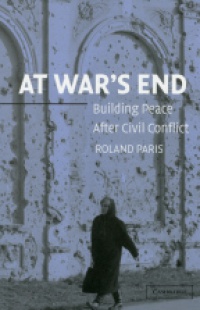 Exploring the challenge of rehabilitating countries after civil wars, this study finds that attempting to transform war-shattered states into liberal democracies with market economies can backfire badly. Roland Paris contends that the rapid introduction of democracy and capitalism in the absence of effective institutions can increase rather than decrease the danger of renewed fighting. A more effective approach to post-conflict peacebuilding would be to introduce political and economic reform in a gradual and controlled manner.

Reviews
"At War's End is the state of the art treatment of the dilemmas of reconstruction and peacebuilding after war, intervention and civil conflict." Michael Ignatieff, Director, Carr Center for Human Rights Policy, Harvard University

"At a moment when politicians and pundits are debating the wisdom of nation-building, Roland Paris brings us an important and groundbreaking book. Theoretically rich, historically informed, and analytically innovative, this authoritative volume will be invaluable to scholars and practitioners alike who are interested in understanding what it takes to build peace after civil wars." Thomas G. Weiss, Presidential Professor and Director, Ralph Bunche Institute for International Studies, The CUNY Graduate Center

"Roland Paris's At War's End is a major contribution to an understanding of the theory, practice, and consequences of peacekeeping that should be read by scholars and practioners alike. Paris expertly demonstrates how peacekeeping has evolved from the modest attempt to keep the peace to the much more ambitious agenda of engineering the socio-political conditions for a stable peace. The goal is nothing short than the promotion of "liberal" states. But, as Paris documents, the road to hell can be paved with good intentions; the attempt by the international community to promote democracy and markets has created, in various places, not a liberal peace but instead renewed competition and violence. His recommendations - that the international community should prioritize order over democracy - should be debated seriously by all those who are concerned about the future of peacekeeping." Michael Barnett, University of Wisconsin

"This is the best book yet written on peacebuilding operations, a must for both academics and practitioners." Peter Viggo Jakobsen, the University of Copenhagen

"It is hard to imagine a more timely study than Roland Parisas superb analysis of the peace-building experience of the last decade. As the United States gropes its way through the morass of Iraq, its leaders need to read At Waras End and concentrate on developing timetables and building institutions." Robert A. Pastor Vice President of International Affairs, American University

"This book will surely stand as the definitive treatment of the intellectual and ideological origins of international peacekeeping and peacebuilding in the post-Cold War era. The breadth of cases, the rigorous assessment of outcomes, and depth of policy insight are most impressive." Fen Osler Hampson, Professor of International Affairs and Director, Norman Paterson School of International Affairs, Carleton University

"Few studies of peacekeeping and peacebuilding merit the description 'breakthrough.'... This is one of them." Michael Pugh, Director, University of Plymouth International Studies Centre and Editor, International Peacekeeping Journal