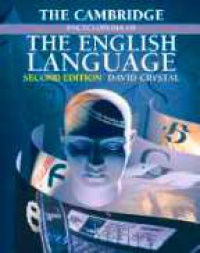 The Cambridge Encyclopedia of the English Language is one of the publishing phenomena of recent times. Rarely has a book so packed with accurate and well researched factual information been so widely read and popularly acclaimed. It has played a key role in the spread of general interest in language matters, generating further publications and broadcasting events for an avid audience. Its First Edition appeared in hardback in 1995 and a revised paperback in 1997. There have been numerous subsequent updated reprintings; but this Second Edition now presents an overhaul of the subject for a new generation of language-lovers and of teachers, students and professional English-users concerned with their own linguistic legacy. The length of the book has been extended and there are 44 new illustrations, extensive new material on world English and Internet English, and a complete updating of statistics, further reading suggestions and other references.