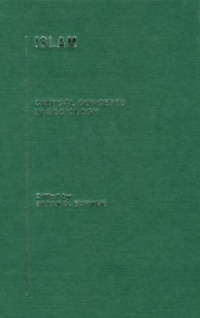 Emphasizing the global nature of Islam in the twentieth century, this collection brings together the essential published scholarship on Islamic thought and institutions, approaching its topic from a social science perspective. The thematically organized set features an original introduction by the editors, and a comprehensive index.
Volume One: Normative Conceptions of Islam as a Religion This volume sets out the principal dimensions of Islamic self-conception as a religion. It deals systematically with the meaning of Islam, the message of the Qur'an, the Prophet Muhammad, Hadith, and ethics.

Volume Two: Normative Concepts of the Socio-political Dimensions of Islam Explores the normative or ideal doctrines of Islam with respect to the operation of the public domain. In particular, the volume considers Islamic teaching on the economy (such as profit and investment), political life (especially the relationships between the state and the community), the nature and function of law, citizenship, and international relations such as war and peace.

Volume Three: Islam and the Private Sphere sphere. This section is particularly concerned with Islamic teaching on women, family planning, reproduction, the status of children, divorce and marriage. It considers and explores the debate within Islam over women's rights and how social change has transformed the private sphere.

Volume Four: Islam and Modern Society
This volume takes a critical look at Islam in actual relations to the state, economy and society against the back-cloth of the normative paradigm. It considers how modernity and globalization have had an impact on Islamic public institutions. It considers various Islamic responses to modern global society including traditionalism, modernists, liberal Islam and fundamentalism. It concludes the problem of Islamic authority in a secular global context, and considers such issues as the Islamization of science.