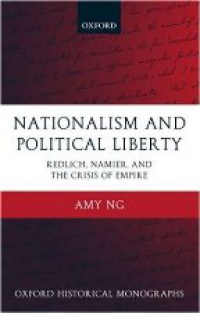 National self-determination and the formation of nation-states has been the preferred liberal solution to the nationality problem in Central and Eastern Europe. Historians have played a prominent role in constructing nationalist narratives to legitimize the new nation-states arising from the corpse of the multinational Habsburg empire. The alternative liberal and historiographical tradition which privileges multinational states over nation-states, most famously associated with Lord Acton, has been relatively ignored. Dr Ng addresses this imbalance by concentrating on the lives and works of Josef Relich (1869-1936) and Lewis Namier (1869-1936), both politically active historians from upper-middle-class assimilated Habsburg Jewish backgrounds. They were anti-nationalist historians in an age of nationalism, and staunch defenders of parliamentary democracy in an era when parliamentary democracy came under attack from both the political Right and Left. Both men argued that modern nationalism with its absolutist claims militated against the spirit of tolerance and mutual compromise essential to parliamentary government. This innovative, intellectual history places Redlich and Namier in context.