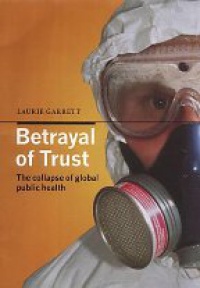 Betrayal of Trust. The Collapse of Global Public Health

This is a study of a full-blown global health crisis in the making. Laurie Garrett takes readers around the world to reveal how a series of potential and present public health catastrophies marks the death of public health and taken together form a portrait of real global disaster in the making. She argues that public health is a bond between a government and its people and if either side betrays that trust the system collapses like a house of cards. The book also aims to illustrate how, since 1980, this trust has frayed and our global public health system been systematically destroyed. It contends that, with globalization, no person is safe from antibiotic resistant superbugs, epidemic or biowar. Garrett takes the reader to India, where an outbreak of bubonic plague created international hysteria; to Zaire where the deadly ebola virus broke out in a filthy and completely unequipped hospital, and to the 15 states of the former Soviet Union have seen the collapse in their public health system. She also explores the increasingly chaotic, ungoverned world of biological terrorism.