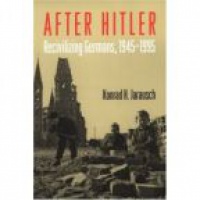 How did the Germans manage to recover from the shattering experience of defeat in World War II and rehabilitate themselves from the unspeakable crimes of the Holocaust? This book seeks to answer this most important question of German history during the second half of the 20th century by analyzing the restoration of civility and civil society which were destroyed by the Nazis and then rebuilt during the post-war period. It argues that the transformation of German political culture
was the result of a joint effort of the allied victors and a minority of concerned democrats, with external influences predominating initially and internal rethinking ultimately bringing the process to fruition. In the competition between the Western democratic and the Eastern communist models, the former won out eventually, because it proved more appealing to ordinary Germans for material and political reasons. The recivilizing proceeded primarily in three stages: During the immediate postwar
period the occupation powers sought to demilitarize, denazify, and decartelize the defeated enemy so as to prevent the outbreak of World War Three by eliminating those negative traditions that had produced the first two conflicts. During the second half of the 1960s and the early 1970s, the Germans themselves tried to catch up to the modernization taking place among their neighbors by Westernizing their culture, democratizing their outlook and expanding participation through generational
protest. During the second half of the 1980s and the early 1990s they attempted to complete their metamorphosis by repudiating Communism in the East, recovering a more normal sense of identity and dealing with the difficult immigration issue. This long-range transformation process has fostered the emergence of a new Berlin Republic that not only changed the location of the capital, but also infused German politics with a new, more self-confident spirit. Viewed from the vantage point of the
physical
and mental devastation of 1945, this rebirth is a truly astounding success story.