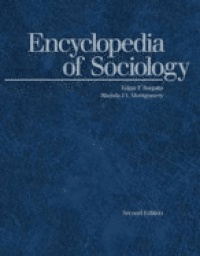 In his preface, editor-in-chief Borgatta also editor-in-chief of the first edition (LJ 7/92), a Dartmouth Medal winner offers two reasons for this revision: public interest and changes in some areas of sociology leading to the realization that "a substantial and thoughtful addition of titles would add breadth and depth to the Encyclopedia." The new encyclopedia presents essays written by scholars about a large number of topics within the broad field of sociology. It continues to be useful both for scholars and professionals investigating new areas of study and for students needing introductory overviews. Where the first edition contains 370 essays in four volumes, the second edition has expanded to five volumes with 60 new essays. New articles include "Censorship and the Regulation of Expression," "Futures Studies as Human and Social Activity," and "Internet." The new edition also revises and updates many of the original essays. For instance, "Feminist Theory" now discusses the 1990s, and its secondary bibliography includes texts published in 1995 and 1999. The second edition also reflects changes in our society and academics by incorporating some topics into different essays or changing the titles of certain articles. As with the first edition, the arrangement is alphabetical by topic. The signed essays provide a thorough and detailed overview of the subject. Secondary bibliographies and See also references occur at the end of each essay. This excellent new edition of an already highly regarded encyclopedia is highly recommended for all academic and larger public libraries. Cynthia A. Johnson, Barnard Coll. Lib., New York Copyright 2001 Cahners Business Information.